Guided Mr. Gene Hunter, Tina Hunter and Tina’s father, Len, this morning for DAY 1 of 2 in hopes of finding some large redfish and some speckled trout. We’ll be fishing together again on Thursday hopefully in much better conditions.  Hit Destin again where Redfish University has been producing great numbers of bull redfish sight fished and blind casted. Very ugly conditions today with south winds at 20-25mph and mostly cloud-cover, a combination that makes seeing fish extremely difficult. Launched in Fort Walton and ran to a big flat near Destin, FL. Started with some decent speckled trout with a few being legal, as well as the usual ladyfish and medium-sized bluefish in the mix. Once we could see a little, I actually spotted a few large redfish on a shallow drift and it wasn’t long before Gene stuck the first bull redfish. Ten minute battle produced a quality 20# fish. A few minutes later, Tina sticks another. As fish were being fought, from the platform I could see a few more singles cruising and threw to each of the three isolated fish. No reaction at all today unlike last week when most fish would chase down a well-placed bait. I tried hard as well to sight fish and blind cast redfish but I didn’t even get a redfish strike. Glad we brought Gene and Tina! In the mix today was a ton of trout, a flounder, some nice bluefish, big ladyfish, small grouper and the dreaded catfish and gafftop sailcats. It was a really weird day of fishing but most disappointing were the big redfish. We’ll hit them again on Thursday!!! Hopefully in better weather. 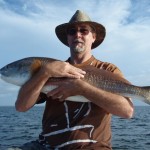 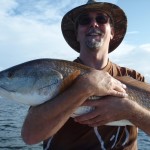 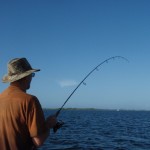 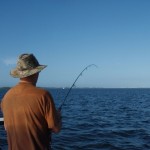 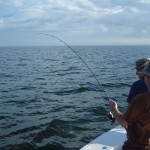 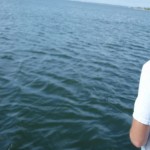