Guided Mike Coleman and his wife, Erin, this morning. The Coleman drove all the way from their vacation spot in Panama City to get some eats last night at Peg Legs and fish today with me. Mike is down from Bentonville, AR. and  handles the Pure Fishing(Berkley, Penn, Abu Garcia, All-Star, Fenwick, etc.) durables for all the Wal-Mart  fishing departments along the Gulf Coast. We met at several meetings at Wal-Mart headquarters in Bentonville in the past few years. Lots of the guys have come down to fish with me and have allowed me to assist and consult their reps while visiting Wal-Mart stores here in our area. Got a late start at 545am and ran east into East Bay where we had some stiff winds out the southwest. Approached our bank in choppy but managable conditions. We tossed a  few Sebile Bonga topwaters but the wave action really made it difficult for the fish to target and find the baits. Skipped the Stick Shadds and went directly to the Gulp! 5″ Jerkshads in camo and watermelon. Because the wind and chop had been hitting the banks pretty hard all night and morning, there was a distinct line of good water and bad water. We skirted this color change to produce some good quality trout but some predictably very small ones as well. Made a run for the southside and threw at schools of mullet to find more trout. Found a few decent ones but nothing to really cheer wildly about. I just wasn’t quite feeling it in the bay today and knew the southwest wind was making it difficult. Back to the ramp at 730am, and we trailered to Oriole Beach to fish Santa Rosa Sound. We made a pretty long run to the east to get away from everyone and found some very large schools of mullet on the north side and in between some docks. Tied on some 1/4oz. Johnson Gold Spoons with very long 15# Stren Tinted Fluoro leaders in Gunsmoke and made long casts to the mullet schools. It wasn’t long before some 6# redfish were hooked and heading to the boat. We felt like we made the right decision although the fishing was pretty difficult in the Sound as well. I do like that north side to be a wind-blown as possible. All fish released. It should be better tomorrow and the rest of the week. E Holstman 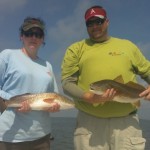 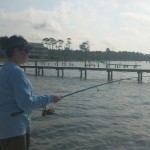 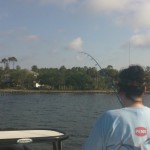