Two trips and it got better all day at Redfish University-Jan. 9, 2012

Guided a nice couple from West Point, GA. this morning. Started with some nice speckled trout but found the bite to be pretty slow. Eventually, we found a big group of fish and had a decent run. At 800am, we took off to find those huge redfish everyone is coming to Redfish University to see. Got on the trolling motor and didn’t see a redfish! Checked a few more productive areas and didn’t even pick one up blindcasting. Very disappointing but they simply were not there. All fish released this morning and we’ll get the redfish later in the week.

This afternoon’s trip with Mr. Colby is another story. More of an instructional trip this afternoon with a very good angler who was interested in learning a few new areas to produce great numbers in the Fall/Winter. Predictably, it started a little slow but really ramped up as the water rose and the sun fell. Stuck some big trout on Jerkshads and Bongos including a great 4.5# fish. We also had some great flounder action in shallow water. A few dropped the hook at the boat but got a few in the well for Mr. Colby to stuff this evening for the Championship Game. Next was the redfish. Found decent numbers in shallow water and again, some came unbuttoned. As the sun set, we both switched to Bongos and found great action with both large speckled trout and some redfish from 25-29″. Definitely a blast on topwater and we viewed some awesome explosions. We even got a nice black drum bonus in the same area. Not bad, some Grand Slams on a difficult day of fishing! Mr. Colby only wanted some flounder so that’s what we took. All other fish released. Oh yeah, and we ran into a lost white trout fisherman. Entertaining, indeed. You’re welcome.:) Thanks, E Holstman 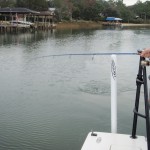 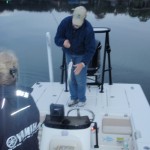 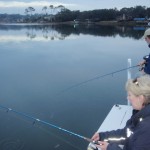 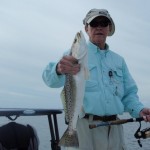 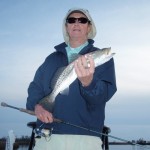 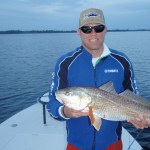 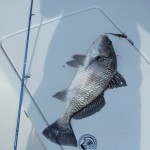 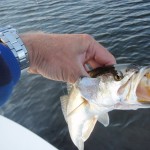 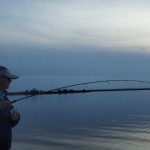 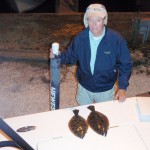