The redfish woke up and so did everything else at Redfish University-Jan. 31, 2012

Guided my longtime family physician and a family friend today. They had been hearing about the huge catches of redfish, speckled trout and flounder and wanted to get in on the action and have a fish fry. One angler was very experienced and the other was a true beginner and needed extra guidance. Very, very windy today but the water was moving very rapidly which helped tremendously. Started with quite a few very nice speckled trout(one 4# fish) in the 16-22″ range and a 26.5″ redfish right off the bat. Travelled south and found a bunch more speckled trout, quality redfish and some flounder. Fished both wind-blown and protected banks where there was an abundance of mullet in all sizes. The guys did a great job of focusing on technique and casting in between beers and cigars. We actually had 5-6 nice flounder to the boat today but only one hit the deck which turned into a Grand Slam for our new inshore angler, Dr. Bill. Bill also stuck the largest speckled trout I’ve ever seen in our target area. Hooked the fish, it jumped, took lots of line, jumped again, came to the boat, surfaced and spit the hook. I would estimate the trout at 6-7# easily. Just as well, he would have been released. Ended the day with several topwater strikes but nothing found the hooks. Total for the short trip was 9-10 redfish, 25-30 trout and some dropped flounder. Most fish released but three redfish from 24-26.5″, some speckled trout in the 16-23″ range and a flounder were taken for the cookout. They caught so many fish and worked me so hard I charged them double! Hitting them with the hammer again tomorrow, Thursday and Friday. Thanks, E Holstman 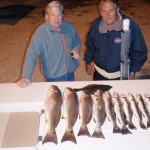 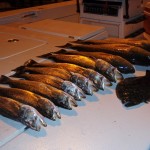 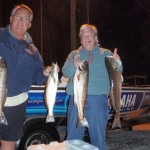 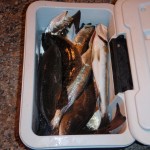 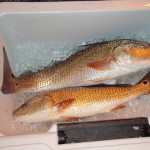 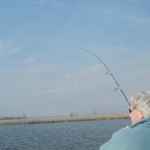 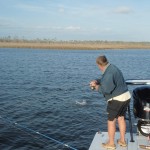 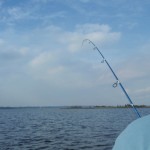 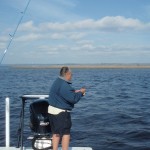