Tuesday morning I guided a couple that was interested in learning about the large redfish in Pensacola Bay, Pensacola Pass and along the beaches. Started around 630am and ran towards to the Pass. Found some groups of pelicans and seagulls diving and found a few redfish under them. Continued to the beach and didn’t see much happening although we did find a few in the surf and tempted them with 4″ Gulp! Shrimp. Ran back inside and concentrated on some usually very productive flats where I have been finding nice amounts of fish. Both Bongos and 4″ Gulp! Shrimp took plenty of redfish between 15-25 pounds. Fun morning of instruction and hot fishing. All fish released.

Last night, I met a fella at Hopjacks traveling the US and fly fishing along the way. He had been fishing in California, Montana and some other area between here and there. Had a few beers and told him to checkout my website and he mentioned he’d never caught a redfish and would really like to catch one on a flyrod. As luck would have it, I know how to catch both legal and bull redfish pretty well!  He chose the bull redfish and we set a departure time for 830am this morning. Went directly to the area we did so well on Tuesday and immediately started seeing redfish. Large redfish were hooked on both fly rods and light tackle and he was thrilled they fought much harder than Montana’s rainbow trout. We found a huge black drum tailing on the flat and took him with a 4″ Gulp” Shrimp. This drum was the biggest I’ve ever seen anywhere and I would guess a 45# weight on him as he bottomed my 30# Boga. All fish released happy and healthy. Thanks, E Holstman 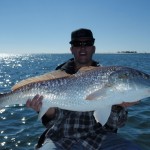 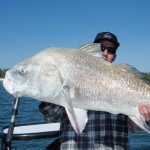 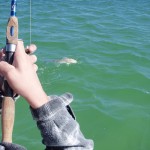 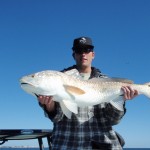 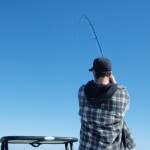 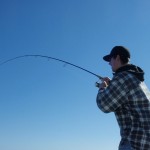 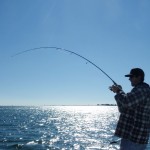 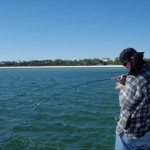