After a quick four day break, I was very excited to get back on the water. Guided a fella stationed here for a few weeks that wanted to get out and catch some redfish and trout. We chose this afternoon since the water was coming in and the forecast indicated diminishing winds. Met with a pretty decent breeze out of the north and water that wasn’t moving in as fast as anticipated. Found plenty of really nice speckled trout in the 16-19″ range on our first stop and these fish were pretty particular about bait movement. Slow taps and deadsticks drew the most bites. Second stop produced some nice redfish in the 23-25″ range that were found inside small schools of mullet. At the third stop we found lots of flounder in the form of mud-trails and on our hooks. A few flounder were in the 3# range which was a pleasant surprise. We continued to plug away at the redfish and speckled trout as the sun fell and even had a few good topwater strikes right before dark. All-in-all, slow but steady fishing with very little movement from the stalling north wind. All trout and most redfish were released and a few better quality eating fish made it home for dinner. Back at it tomorrow. Thanks, E Holstman 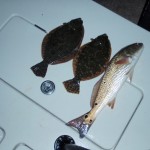 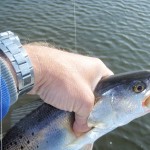 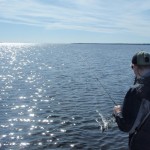