Guided Mr. Roger Orth and his son, Roger Jr., this morning. Picked up the duo at 430am and took a little drive in the Excursion east to some areas where I found several nice groups of redfish and speckled trout. Arrived at the first flat at 500am with topwaters ready. Caught some decent speckled trout and had several very nice redfish blowups but no takers. They just didn’t have their hearts in it this morning but it was fun watching them crash the baits. Ended up switching to Johnson 1/4oz. Gold Spoons and began sightfishing and blindcasting for redfish. Stuck some nice redfish pretty quickly but as usual, the bite slowed as the temperature rose. Roger Sr. was able to masterfully present a spoon to a flashing fish and the fight was on! Roger also ended the day with the largest redfish at 25.5″ Lots and lots of boats on the water this morning. I am very glad we got out early and got to the fish before the party started. All fish released with the exception of three quality redfish that will be cooked as Redfish on the Half-Shell tonight at Roger’s dinner party. 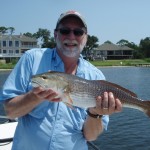 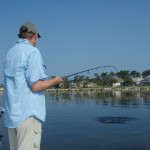 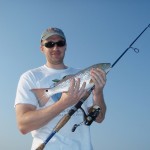 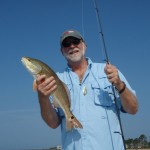 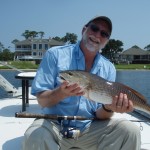 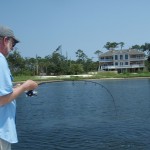