Lots of speckled trout and eventually lots of redfish at Redfish University-Dec. 26, 2011

Guided a very talented angler and nice fella from over on the Pensacola Foolish Forum this morning. He just really needed some new areas to catch redfish and speckled trout. Started at first light and in the first few casts, quality speckled trout were flying in the boat. As always, we found the better trout inside groups of mullet in 3-5′ of water. Slowly bounced Gulp! 5″ Jerkshads continue to be the best choice of bait. Our trout ranged from 1.5-3.5#. Speckled trout accomplished! Next, we hit some areas where there has been plenty of redfish in the past few weeks. Hooked a few quality redfish that dropped the hook. We checked some deeper areas and then traveled way north to a bank famous for tailing redfish in the Winter. Slowly moved down the bank and found a handful of medium redfish. Some were tailing, most were sitting and with very low light and cloud cover, we found it extremely difficult to actually see the redfish. Looking for small “rings” and disturbances is the key to finding these very shallow, resting fish. I also introduced him to some other great locations that will be outstanding for sight fishing in a month’s time. With the water almost all the way out, I had the idea of hitting another shallow area with a warm water runoff that had some gradual drops. Pulled in and found exactly what we were looking for. Big groups of mullet were everywhere and so were the redfish. Launched baits into the mullet and double hookups!! Most fish in the 23-27″ range and even a few nice trout in the mix. We let it rest for a few moments and hit it again with very similar results. Finally count was 8 mid to upper slot redfish, who knows how many speckled trout and a flounder. Grand Slam for Alex! A few fish went home for dinner and all others released healthy. Back tomorrow for more! Thanks, E Holstman. 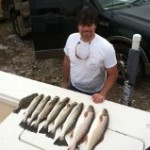 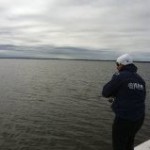 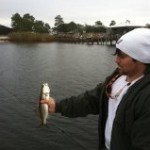