Postponed some trips this week due to bad weather. Playing catch up. Pretty difficult conditions the last few days but really found some huge numbers of speckled trout, redfish and flounder. On Thursday, I guided a local angler who called me and said he’d like to fish with live bait in the areas where I’ve been taking all three species. I informed him that I never fish with live bait and Redfish University is an artificial bait only guide service. He returned with, “I will bring my own live bait and I will catch more fish than you with those silly Gulp! baits you’re always writing about.” So I laughed in the phone but heard dead silence on the other end. This guy was completely serious and quite confident I must say!! Well, I can do some solid trash-talking as well and love a challenge so I said “bring it!” To add to the excitement, I assured him if he outfished me with live bait, I’d hand HIM $400. We met at the ramp yesterday morning and he dumps six dozen live shrimp and a few dozen bull minnows in my livewell. 14-2 in the first 30 minutes so he switched to Gulp! Ended with over 40 speckled trout, 7 redfish and 4 flounder. Really nice guy and we had a great time ribbing each other. He took some trout, redfish and flounder home for dinner and I packed 5 dozen shrimp on ice for him for a shrimp cocktail appetizer. He’ll be back in a month for an artificial only trip!

Today, I guided a fella from Texas and his son-in-law, Eric. Eric had never been fishing before and needed some in depth instruction and the absolute basics. Second cast, a really nice trout, then 2 awesome redfish and he was off to the races. He ended up sticking over 15 trout, 3 redfish and had a great flounder to the boat but dropped it at the end. Almost a Grand Slam on his first fishing trip ever! Today’s total was 30+ trout, 5 redfish and 3 flounder. Kept a few fish for a fishfry and all others released. A full week of trips coming up so more reports soon. Busy, busy, busy. Thanks, E Holstman 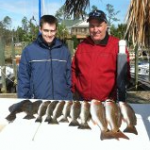 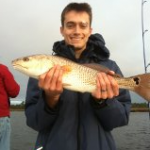 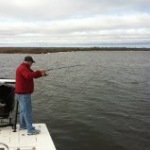 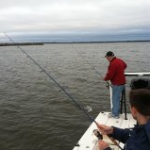 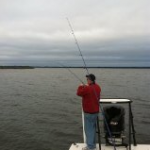 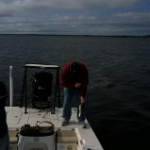