Invasion of the little redfish at Redfish University-December 22, 2009

Guided Mr. Brad Barber this morning. Brad wanted to learn about shallow water redfishing in our local upper bay areas. Started out at first light and cruised to the first area. Immediately saw wakes everywhere. Push poled at first and then switched to the trolly to bump up fish. Found large groups of lower, mid and upper level redfish but found it very difficult to entice the larger fish to bite as they were very unactive and basically laying on the muddy bottom in extremely dirty water. Stuck a few decent fish and then proceeded to absolutely hammer 20-25 lower slot redfish. Only a very slow tap-tap retrieve would produce fish and the big fish wouldn’t even take a dead-stick stinky Gulp! Not really used to that frustration! Anyway, much was caught and much was learned. Hopefully Brad will return to produce lots of fish for himself and his family in the future. All fish taken on 3″ and 4″ Gulp! Shrimp in whatever color you’d like. All fish released. 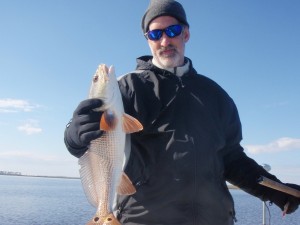