Instructional trip with plenty of fish at Redfish University-June 17, 2010

Guided brothers Jim and Scott Michie this morning. Jim and Scott are anglers from Destin, FL. and wanted to learn about the inshore species available along the Gulf Coast. Started early with the topwaters and found plenty of speckled trout including a 4.5# fish. Moved to a bank flat and fished the slicks with topwaters with the same result. Quite a few small fish with some nice ones mixed in but always a great time on surface baits. Switched to Gulp! Jerkshads and pitched slicks and mullet to boat several more trout. Made a short run to some grassy redfish banks and pulled some small-medium redfish. Hit some deeper structure for some more speckled trout and those pesky white trout were everywhere. Next, we went to some shallow docks where there have been quite a few redfish and normally lots of flounder this time of year. We were able to wrestle some redfish out from under the dock-shade but no flounder today. I also pointed to some great areas to look for tripletail this time of year but no fish were seen although it shouldn’t be long until we start finding these tripletail pretty consistently. Ended the morning poling through some shallow stained water and saw a few more redfish but no biters. Back to the ramp to show the guys some great fluoro to braid knots and some other very helpful tips. All in all, a good day of catching fish and I hope Jim and Scott learned a ton and can apply that inshore knowledge to catch many fish together in the future. All fish released. 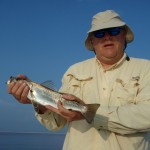 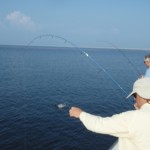 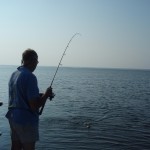 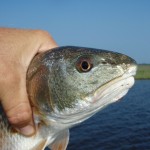