Great early and the front pushed through at Redfish University-November 23, 2011

We really needed to hustle around this morning with the front blowing through some time in the mid-morning. Started at 515am and took off to some very productive areas for redfish and speckled trout. Light winds, decent water movement and overcast skies provided us some confidence in finding and catching our targeted species but I knew our time was limited. We immediately boated several very nice speckled trout and a few redfish on Gulp! 5″ Jerkshads and Sebile Bongos. Unlike the last few days, all of the trout were legal fish in the 16-20″ range and even found a 31″ redfish interested in a well-place Gulp!. It was interesting because this fish was visible in six feet of water as he was just under the surface when I saw him. As the fish fell to the bottom, I asked the angler to make a 20′ cast in that direction and he took gladly took the bait. Not really sight fishing but a great redfish nonetheless. We continued to steadily stick speckled trout and a flounder in a few similar areas and the around 900am we were covered in the blue skies and a 15-20mph wind. Even with all three of us fishing hard, we only managed a few more speckled trout. Frustrated by the conditions and our luck, I decided to hit a shallow protected bank to see if I could pick out a few redfish for the fellas to target with Gulps! No problem finding the redfish but they were EXTREMELY uncooperative although we did pick up a few blindcasting and I nailed a 24″ fish that I spotted from a huge distance. Fortunately, we got out very early and used the tricks and techniques to catch as many fish as humanly possibly before the conditions really went downhill. It’s always difficult to explain that beautiful weather, blue skies and sunny conditions isn’t always the best fishing conditions. No excuses at Redfish University because if they’re wet, we’ll catch them! Skipping tomorrow(I think), got some beggers but hitting it again Friday-Sunday then out of town with sponsor commitments next week. More reports to come and Happy Thanksgiving. E Holstman 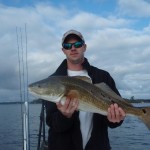 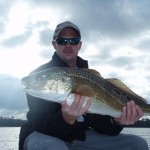 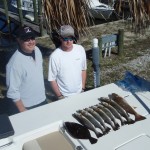