Guided Kurt and Jim today for some inshore redfish, speckled trout and flounder. The guys are from Oregon and do some fishing there for steelheads and salmon. Our inshore fishing requires some very different techniques but it only took a few minutes for them to get very comfortble with sticking big numbers of fish. Very windy today so boat positioning was incredibly important. I did my part and they did their part by hammering the fish. Started with some very nice redfish on some shallow, wind-blown flats. Found redfish in the 15-31″ range along with some quality speckled trout in the same area. It didn’t take Kurt long to secure the prized Grand Slam with a nice flounder in the mix. Moved to a different area and found a speckled trout on nearly every cast. We probably got 40-50 trout with several being legal-sized including a great 5# fish. Today we stuck to the Gulp! 5″ Jerkshads in camo with 1/4oz Marsh Works jigheads because of the high winds. We also had a few really nice redfish and big trout slip the hook near the boat but plenty of great action nonetheless. The guys took home a few fish to eat for dinner and the rest were released happy and healthy. Hitting them again tomorrow! Thanks, E Holstman 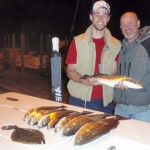 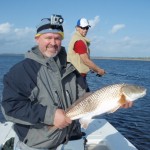 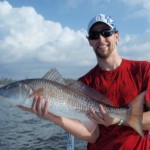 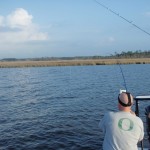 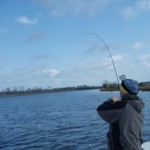 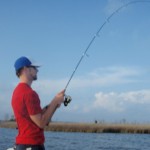 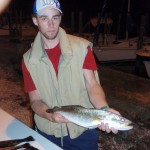 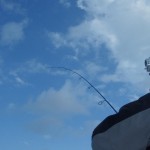 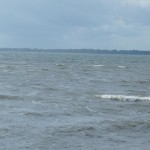