Guided Leon Conley and his sister, Kelly,  this morning for Day 1 of a 3-Day Pensacola inshore fishing adventure. Big full moon last night and nearly record low temperatures were sure to make things very interesting today. Started fishing at 500am this morning with topwater baits over in East Bay in about 2-4′ of water. By the way, and in my opinion, the redfish and trout fishing is so much better in the bays(Pensacola, East, Escambia, Blackwater) right now. Larger numbers and definitely better quality. Larger baitfish and sand bottom seems to always produce bigger fish. Like yesterday, there was very little visible bait and mullet in the area which made things pretty difficult. The duo stuck a few good trout on Sebile Bongos and Stick Shadds but the action was painfully slow with the exception of a large school of small trout that was slicking an area off the banks. Looked at some large schools of menhaden 200 yds off the banks and like always, gafftop galore.  Approached the banks with high water conditions and only caught a few small redfish with a few other misses. Although it was a protected bank, the turbulence caused the banks to be muddy out to 20 feet so Woody’s plastic worm rattles inserted in the Gulps! really led the fish to the bait.  Switched to smaller baits like the Gulp! 3″ Shrimp to produce a few more speckled trout but only a few fish were legal. No big trout today. With things looking pretty grim, we decided to make a long run to north Blackwater Bay. Arrived around the Peterson Point area and fished a few protected banks with uneven bottom and lined with docks. Brightened the day with some decent speckled trout and a few medium redfish to take Gulp! 5″ Jerkshads in camo and watermelon.  An interesting discovery today was the unusual amount of small bluefish(7-12″) and stingray in the north Blackwater Bay area. Lots and lots of Gulp! Jerkys cut in half by bluefish today. We really need some more rain to even things out in the bay system. Anyway, we also fished the mouths of Broadmouth and Weaver Rivers along the sand dropoffs. Like in the Spring, we found plenty 15-17″ speckled trout staged just outside the river mouths. In both rivers, they were basically in identical areas outside the main river. It was a pretty tough day but I know we did as well as we possibly could under the delicate conditions. Ended with 25+ trout(11-12 legals), 4 redfish(16-23″), some bluefish and some beautiful gafftops.  Hitting some different areas tomorrow in very similar conditions so we will try to improve on today. I hope…Thanks, E Holstman 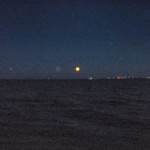 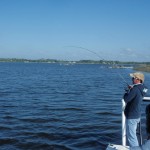 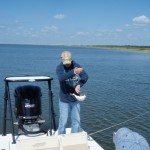 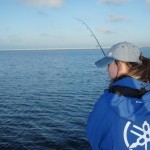 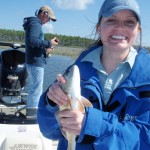 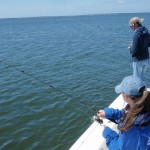