Day 2 with Leon Conley and his sister, Kelly, the talented anglers wanted to target speckled trout and take some home for a fish fry. We’re still on nearly full moon so starting early is very important. Started at first light and hit some areas along Scenic Hwy. south of The Chimney and along the railway rocks. Since Berkley’s purchase of Sebile Lures, we’ve been throwing the Bonga topwaters in Yellow Pepper and the Stick Shadds in Yellow Pepper and White Lady and have discovered that our local redfish and speckled trout find these baits quite mouthwatering. As we quietly trolled the banks, Leon and Kelly made very long casts and as close to the  banks as possible. Looking for spraying bait is a great indication that some redfish and trout may be present. A few casts into the morning and a 4.5# and 5# speckled trout were in the boat. Further down the bank, a few huge explosions from large fish but only connected with a few more 2-3# trout. Interestingly, a few banks that are usually good for 6-7 redfish didn’t produce squat. Took off for some docks on the south side of the bay and switched to Gulp! Jerkshads and stuck with the Sebile Stick Shadds. Immediately started pulling quality trout including two more nice fish at 4# a piece. Tossed one the big ones and kept a few more nice trout for the fry. By 745am, we had caught 20-25- trout, keeping 6, and set off to the Pass and beach to find some pompano and redfish. Covered a few flats near there and again, found only a few large redfish unwilling to bite. Ran down the beach and spent some time looking for pompano. We did find some small schools of fish, had some trailers but they just wouldn’t commit. Sometimes that happens when there’s not enough wave action and in crystal-clear water. Viewed a few larger redfish that wouldn’t take Gulp! baits and then screwed around with some very large ladyfish before heading in for the day. Great day of quality speckled trout fishing with most fish released. Tomorrow we will hit the Sound and round out their cookout with some redfish on the halfshell. Thanks for looking. E Holstman 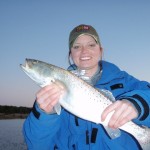 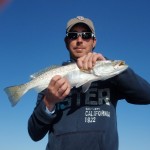 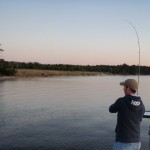 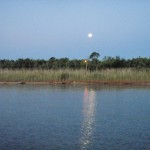 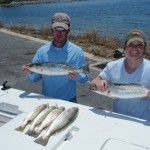 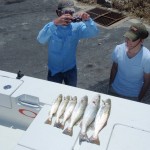