A tough act to follow and caught some difficult fish at Redfish University-Jan. 30, 2012

Guided Mike and Shawn today for some inshore redfish, speckled trout and flounder action. Mike’s last Redfish University trip back in December was an outstanding experience with a rare Super Slam(redfish, trout, flounder and stripers) and tons of quality redfish and speckled trout so the pressure was on to do the same or even better. Well, not so much but a pretty decent display of how to catch extremely uncooperate inshore fish. The upside of each extreme trip may be the recognition of how easy it can be and how difficult, but not impossible, our local fishery can be. Nonetheless, we always expect a high quality catching trip. Started out with a 4# speckled trout followed by some more legal trout with many short-bites and misses. Next, we covered an area infested with huge amounts of mullet of all sizes and could only stick the short redfish and dropped a very big speckled trout on a shallow flat. Poop. This meant the redfish were going to be a pain all afternoon and the statement stood true. Ran into some ponds to find some flounder and ended up with a few quality flounder in addition to those that we got while hitting the speckled trout. We even had a double-hookup on flounder today which was neat. Each area we fished was good for a few decent speckled trout and flounder but really failed to find a consistent group of cooperative fish. Just before dark we approached a shallow flat where several over-sized and legal redfish were tailing away. Well-placed Gulps!, spoons and topwaters were ignored. I dropped a few pinpoint spoons on the fish with no response. Maybe they were scratching their noses on the bottom. Anyway, we ended with several speckled trout in the 14-22″ range, 4 nice flounder and surprisingly, no legal redfish in the boat. Doesn’t happen often at this place called Redfish University. Most fish released and some went home for dinner. Back again tomorrow and I hope the redfish will wake up. Thanks, E Holstman 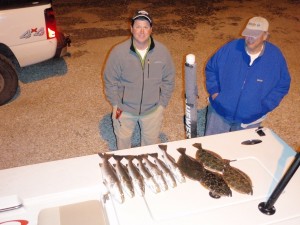 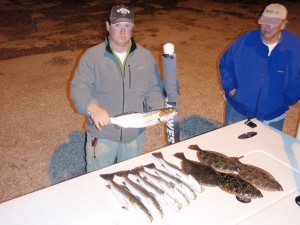 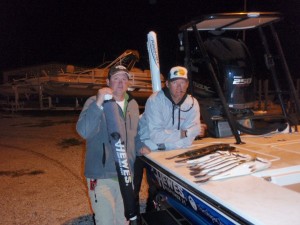