A short window for redfish and trout then a scramble at Redfish University-Aug. 2, 2011

Guided Patrick Price and his sons this morning for some hot topwater action way over in East Bay. Started at first light and knew we’d need to really hustle to produce some fish before the water slowed down. Really popped some nice redfish and speckled trout in the first few hours and then it shut off immediately. We switched baits and techniques to draw a few more strikes but at 745am the struggle was on. The great thing about fishing with experienced anglers at Redfish University is the fact that they can catch fish and they understand the conditions as well as I do for the most part. I gave the group some other options so we cruised toward Pensacola Pass to find better water movement. On the way, we caught a few more speckled trout on Gulp! Jerkshads around Gulf Breeze. Arrived at the Pass and found private/charter boats alike chasing schools of tiny Spanish Mackeral. There must have been 25-30 boats in that mess. The phrase, “no thanks”, was uttered and I happily obliged. Hit the Shoal and caught a few large Spanish Mackeral and jumped off a tarpon on a 6″ Gulp! Jerkshad. They mentioned being very interested in pulling on some larger fish when the redfish and trout action slowed so I suggested the excellent sight fishing for blacktip sharks in Pensacola Bay. Really dumbed it down for these great anglers but they absolutely loved the variety. Pulled in with some fresh mackeral strips and it was on. Blacktips from 4-5.5 feet were happy to eat on the dead tide. Smiles everywhere and a great finale to an up and down morning of fishing. They’re with Redfish University again on Friday with much better conditions so we’re going to hammer the crap out of them. All fish released. E Holstman 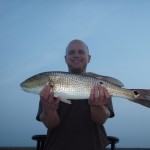 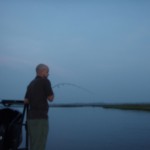 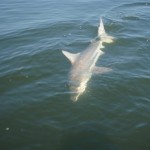 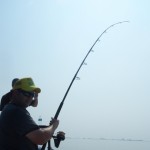 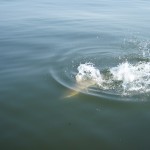 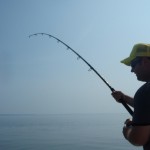 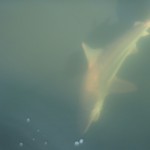