A plethora of trout and a record redfish at Redfish University-Jan. 6, 2012

Long-time Redfish University clients, Jeff and John Shiver, flew into Pensacola International Airport late last night to go do some catching at Redfish U. The fellas wanted to target some speckled trout for dinner and then catch some big fish for a little variety on light tackle. A little pressure, especially considering their extensive travel, but I put together the best plan for their requests. Started at first-light with 1-3.5# speckled trout on nearly every cast. Again, Berkley Gulp! Jerkshads rigged with jigheads and drop-shot style are absolutely the most productive baits and techniques. Fished in the fog for trout until 8am and then ran very slowly into the bay and a very thick fog. The Yamaha SHO doesn’t like to crawl at 19-20mph! Arrived on some shallow flats and immediately found what we were looking for. Huge redfish!! We don’t target diving birds or huge schools of redfish unless absolutely necessary. Used Berkley Gulp! 4″ Shrimp to sight fish some massive redfish. Admittedly, some of the redfish were very difficult this morning but seeing them from a long distance was very helpful and that’s where I was able to help the Shivers with direction and placement. A new record was broken this morning by Jeff Shiver. The old record 31 pound redfish was shattered by one of Jeff’s gigantic redfish which tipped the scales at exactly 35 pounds! I’ve only personally seen one fish bigger and that was in Venice, LA. Redfish Cup prefishing when my partner stuck a 41# redfish just to weigh the beast. Congrats Jeff! Anyway, wore the guys out with big redfish and headed back. Endless trips in the future so back soon. Thanks, E Holstman 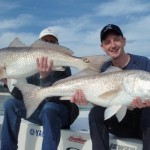 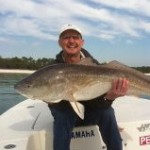 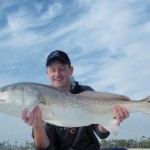 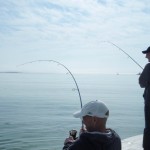 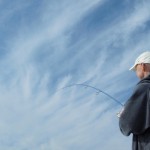 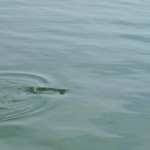 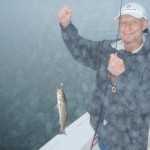 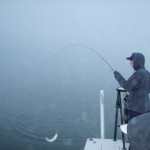 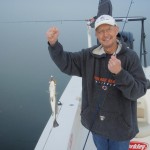