A dream team, slams, the biggest trout I’ve ever “seen” in Pcola and a celebrity at Redfish University-Dec. 11, 2011

Angling perfection and an inshore species beatdown with Pensacola’s best this morning!! After an ill-advised, and unfortunate(for him) guiding postponement last night by a regular Redfish U. client due to cold weather in the month of December, I assembled the Dream Team to go explore some winter areas for redfish and trout. Grabbed the two best all-around, technical anglers in the region, long-time tournament fishing partner Sonny Granger and my brother, Wesley Holstman. Lots of vast angling experience and knowledge on the boat and I was looking forward to the show and learning a bit myself! We decided to fish hard and hammer as many fish as humanly possible. Both of these guys can absolutely bring the heat and they didn’t disappoint this morning! We fished for four hours and covered areas north and south. Most areas produced very quick Grand Slams of redfish, speckled trout and flounder. Many trout in the 3-4# range which was nice. We actively looked for big stripers early but we weren’t able to find any on Bongos and sub-surface baits. We mainly fished new areas with a few regularly stellar areas in the mix to try some different baits and techniques. These guys really know how to produce fish, recognize conditions/patterns/tendencies and they did it with nearly every bait in my box. It was fun to watch and converse about the countless quality trout, over 20 redfish and a handful of nice flounder flopping around the boat. Our southern location was equally as productive. Sonny’s prize was the biggest croaker we’ve ever seen at 2 pounds and Wesley’s pounding of redfish including a 27″ 7.5# beast.

Now to the biggest speckled trout I’ve ever seen in Pensacola. Before I begin, and fishing as much as I do here with Redfish University, we’ve caught plenty of speckled trout in the 6-7.75# range in all seasons of the year. Going further, I’ve had the fortune and incredible opportunity to land huge speckled trout during television shows and Redfish Cup pre-fishing in Corpus Christi, Baffin Bay, Mosquito Lagoon, etc. Some of these fish were measured at 29-32″ and weighed 9-11 pounds. I guess when you fish these areas with some consistency, trophy trout are bound to find your redfish baits. Long story short, I stuck the monster on a Gulp! 6″ Jerkshad in rootbeer with a 3/8oz. Marsh Works jighead on 6# Ultracast Invisi-Braid with 12# Stren Tinted Fluoro in gunsmoke. We were targeting large trout with the scaled down tackle. The fish made a long initial run and surfaced shaking his massive mouth and shoulders. After that point, things were more serious, rod tip in the water and didn’t allow the trophy trout to surface again. After a short sub-surface struggle to the boat, I leadered the beast and noticed the hook was in a bad spot. Put my hand under the fish to lift and with one small head-shake it was gone. I don’t carry a net, probably should, but don’t. Actually, I believe a trout that size should be hand-lifted or Boga/hand-lifted. A net would have done some damage to this extraordinary specimen. Sonny says over 30″ and 9 pounds, my brother says at 30″ and 8-8.5 pounds, I say, great guesses and I’ll go 31″ and 8.5-9.0 pounds. Put it this way, I would have measured its length and girth and had a nice speckled trout replica mount made! So it was gigantic. Anyway, there are plenty more with 6-7# trout regularly. To add insult to injury and after his painful laughing at me, ten minutes later Sonny sticks another big trout in the 6# range, barely hooked and I fumbled that fish in the exact same manner. I will think about a trout-friendly net or a pike lift but don’t count on it.

To round out the fantastic morning, we got the opportunity to spent time with journalist and New York Times best selling author, John Weisman, author of “KBL: Kill Bin Ladin.” He was visiting a regular Redfish University client and wanted to go fishing with me in the future. Ended with a great brunch of Eggs Sardou and bloodies at The Fishhouse. All fish released except for some flounder. Big week of big fish ahead. Thanks for reading, E Holstman. 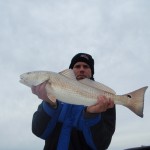 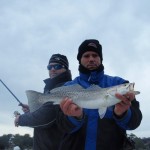 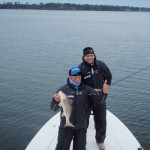 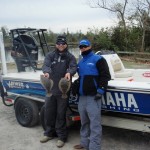 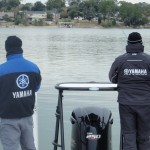 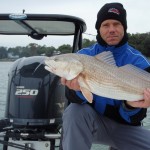 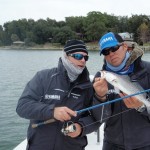 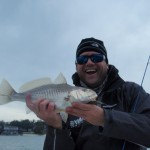 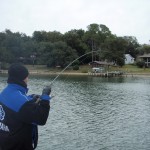 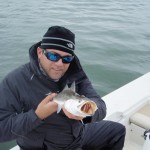 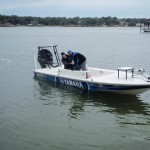 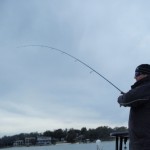