A disastrous morning at Redfish University-Dec. 31, 2011

We don’t make excuses and I was fishing as well. Admittedly, the title is a little dramatic but let’s just say an epic and extremely successful 2011 Redfish University season didn’t end with a bang this morning. We returned safely from a dense fog to terra firma, no one fell off the boat and I remained calm although painfully perplexed so all is well. One or two trips out of a couple hundred is okay but disappointing nonetheless with certainly much more being expected from us. Obviously and understood by RU anglers, the strict use of artificial baits at Redfish University adds increased pressure to produce strong numbers but then again, my clients care nothing about livebait/natural bait for any species of fish. With conditions very similar to yesterday’s tide, wind and movement, I guided a couple new saltwater anglers, Devon and Sara. Both wanted to get some in depth instruction for inshore angling in the Pensacola area and catch some fish for dinner tonight. Superior instruction is easy enough but it’s so much more fun to view the results in the form of a livewell full of redfish, speckled trout and flounder. In the very thick fog, I cruised along at 8mph and kept a sharp eye on my Garmin GPS. It’s not my boating skills that I’m concerned with but the yahoos in the jonboats cruising the bay at first-light in tremendous fog. Arrived safely and began our morning. Found it a bit odd that the duo didn’t stick some quality fish in the first 5 casts so we moved a hundred yards down the bank. Both were good anglers and were making long, accurate casts. Fifteen minutes go by and still no bites so I pick up a rod and hit it. There’s a reason I hit this area and that reason is, there are tons of speckled trout and redfish in the area. Picked up and cruised slowly to another normally productive flat with a few mullet. Ten casts in and still nothing so I’m a little concerned. In a panic, I begin to fish again to just cover the area and find some fish. In a two hours period, each of us picked up a speckled trout, no redfish and zero flounder. How was I to expect my clients to catch fish when I was having trouble as well. This presents a grim scenario. Tried a few other areas and found a few of my favorites, white trout. I got a good laugh at the comment, aren’t those available around the Three Mile Bridge? Definitely not what my anglers come to catch! At 830am, I offered an idea. The idea was we can remain out there and struggle for another three hours or I will gladly take them under better conditions so that some value can be found in the instruction provided. No fish, no pay is the policy Redfish University but come on, one fish each in two hours just doesn’t work for me. The gracious and very patient anglers were not charged a dime and will return next weekend for a RU trip that will, no doubt, be much better. Embarrassing but here’s a photo of some trees, some water and some fog. Thanks, E Holstman

Thank you very much to the masses of regular and new Redfish University clients for making 2011 an absolutely astonishing year!!
Happy New Year and see ya soon. Eric Holstman 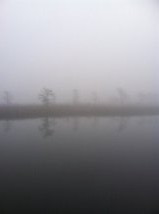