Guided Carl and Steve this morning for some early morning topwater action. Started at 515am and really got into the speckled trout. Landed 20-30 fish in a short period including some very nice 3-4# fish. As 9am came around, the anglers wanted to just catch fish and be around lots of action so we took off for the Pass and found some very nice Spanish mackerel grazing on schools of tightly packed minnows. Lots of sharks in the baitballs as well. The fellas picked off several very nice fish on Johnson Gold Spoons and we called it a day. Several trout and Spanish were taken for a fish fry. 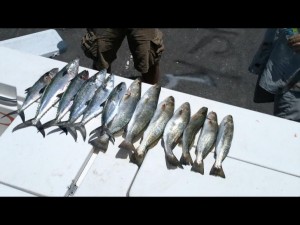