My 250 h.p. Yamaha VMAX SHO Four Stroke Gets The Mornings Off
I spend most of the morning on the trolling motor, but the afternoons the engine gets worked hard running and gunning

This is the time of the year when my engine gets a lot of use on a regular basis, but often has the mornings off. I’ll start my day around 5:30 a.m. and have my customers meet me in Pensacola, then ride with me as we trailer my boat up to Blackwater River or some of the other rivers off Pensacola Bay, which is a 20- 30 mile run.
It’s a real small area, so we’ll launch the boat and not have to run very far. It’s pretty cold in the morning, so there’s no reason to make that long run by boat. From the ramp, we may only run a mile or two, and then spend the rest of the morning on the trolling motor working the shorelines for seatrout and redfish.
So my 250 h.p. Yamaha VMAX SHO four stroke basically gets the morning off. Over the course of the next four hours we’ll catch 40 to 60 seatrout and six or seven redfish. This is the time of the year when some of the big bull reds push up into the river, so most mornings there will be a few of them in the mix.
It’s all just a warm-up for the afternoon, because when the sun gets up, I’ll make the run back to Pensacola, put the boat in downtown, and then chase the big bull redfish in the middle of the bay. What that requires is running around looking for the birds and the bait and actual schools of redfish on the surface. Once you find the fish you want to position the boat up-wind from them, turn off the motor and trolling motor into casting range.
The fish are super aggressive, so double and triple headers are the norm. The drawback is that once you hook a couple of fish and land them the school has gone down and you have to hunt for them again. They’ll likely pop back up a quarter mile away.
We just watch for the birds to regroup and start diving again, then crank up the big motor and run over there while watching for fish on the surface. Once we see them, we’ll speed around to the up-wind side of the school, shut the motor off and cast to them again.
This “crank the motor, race over to the school and shut down” technique may happen 50 or more times during the course of the trip, so my Yamaha is really getting an extreme workout. We’re just constantly cranking up, racing over to the fish and then shutting down, and then repeating it.
But that’s what you have to do if you want to catch a lot of fish. The school will only stay on the surface for a short time, which can be anywhere from 30 seconds to a few minutes, so when they’re up you have to get to them before they go back down again. It’s a run and gun style of fishing.
The motor is so quiet that I could probably keep it on the entire time, but I don’t like to have a running motor when I’m not behind the wheel. You never know what can happen—someone can trip and fall on the throttle or lean on it for balance and the boat goes into gear, so I just shut it off every time for safety.
While my 250 h.p. Yamaha VMAX SHO four stroke gets a little warm-up in the morning, it really works hard all afternoon. On a good afternoon, we’ll catch 20 or 30 of these big, over-the-slot redfish.
I’ve fished over 200 trips this year and have over 140 hours on the engine since March, which isn’t a lot of hours for this motor. Most of the time is put on it in small intervals of cranking up, running a thousand yards or more and shutting down, so it really takes a while to put an hour on the motor, but it’s a solid hour of hard running.
We have a lot of shallow water around here so I have to jump up onto plane in the sand quite a bit. My motor skeg has the paint worn off it from running shallow so much, so this motor really gets put to the test.
My motor literally cranks 30 to 40 times in a half hour period on some days as the fish get spooky don’t stay on the surface long enough for us to get a cast into the school. What’s nice is that I don’t spend any of that time thinking about my motor and if it’s going to crank or run, which allows me to focus completely on the fishing.
When I get home I’ll hook up a hose to the engine and give it a good freshwater rinse, turn the battery switch off and it’s ready for the next day. The motor is just as dependable as it can be, even on the cold mornings it cranks on the first turn. There’s never a surprise with this motor. 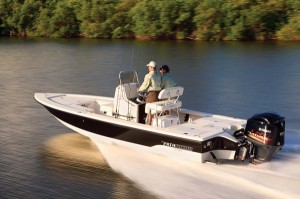