We’ve had some strong SE winds and some unfavorable tide movement but the fishing remains very productive at Redfish University. Guided some anglers on both mornings that just bought beach houses in the area and wanted to get familiar with Pensacola Bay and the surrounding areas. Started early for some legal redfish, speckled trout and some flounder. Had no problem finding a few of each on Gulp! 5″ Jerkshads. In fact, a few speckled trout were 22-23″. When the sun rose, we took off for some very clear, shallow flats in search of the bull redfish. We found plenty and had no problem getting them to attack Gulp! 4″ Shrimp in lime tiger and white. We found several huge groups of 20-30# redfish and pulled on them for a while. Next, we ran back west and found a huge amount of legal redfish on some shallow sand flats. Threw Gulp! 5″ Jerkshads as we sight fished redfish in the 24-28″ range. It was nice to see so many redfish and speckled trout in the shallows so early in the year. Both trips kept a few fish to take to Aegean Breeze, but most fish released. Taking a few days off and then everyday for the nearly three weeks. Thanks, E Holstman 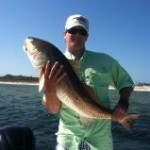 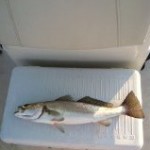 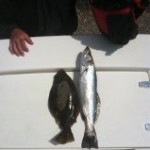