Pensacola Inshore Fishing Charters and Instruction at Redfish University-Jan. 28,29 2013– On Monday and Tuesday, we performed two awesome Redfish University instructional fishing trips here in Pensacola, Florida. On Monday, our anglers were interested in learning about the Winter/Spring redfish and speckled trout fishery in the Pensacola Bay system. These guys are recent transplants and very talented bass anglers but just needed some specific guidance on locations, tide info and bait selection. Needless to say, they received all the above and more! We started with some quality speckled trout on some shallow flats way to the south. The fish were hovering over some darker, muddy bottom areas and were more than willing to take Berkley Gulp! Jerkshads and Berkley Havoc Grass Pigs. We really got some nice fish on a few passes with some reaching the 22″ line and most over 18″. Threw some of those on the ice and took off for some shallow redfish action. Found the mullet and found the redfish. Stuck several fish in the 22-30″ range and threw some of those in the cooler. For the remainder of the afternoon, we concentrated on a very productive “milkrun” finding nice numbers of quality redfish and speckled trout in every area we covered. An estimated 60+ speckled trout, 10-12 redfish and a small striper were taken by some great anglers.
For today’s instructional Redfish University trip, our clients wanted to learn to sight fish for Pensacola’s bull redfish in shallow, clear water. Big winds, a little cloud-cover and unfavorable tides kept The Professor in full concentration mode today. We suited up our anglers with some Oakley Scalpels and Monster Dogs and we were off to the flats. A bit bumpy in the bay today, but no match for the Pathfinder 2300 HPS which made the sloppy conditions look silly. First stop and there were 18-25# redfish in every pothole. Once our anglers learned to recognize the presence of these huge fish, it was game on. Every accurate cast with a Berkley Gulp! 4″ Shrimp resulted in great cooperation. A few areas were a little turbulent but in all areas we viewed fish in singles, fives, tens and even a large 50 fish school. The gents left pretty tired from fighting fish today! All fish released.
A good chance that tomorrow’s Redfish University instructional will be postponed due to some nasty weather this evening which may result in the dreaded double booking on Thursday but we’ll see how badly our clients want to fish tomorrow. You’d be surprised!! Thanks again to our Cyberangler anglers. We’ve hosted five Cyberangler member in January alone. Thanks again and see ya soon. E Holstman 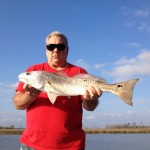 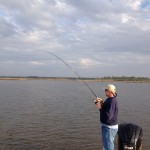 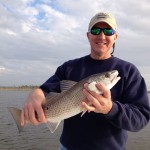 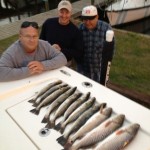 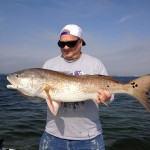 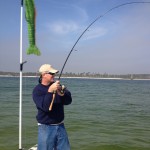 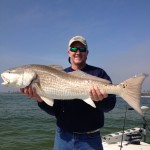 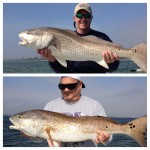 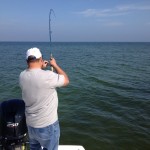 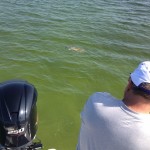 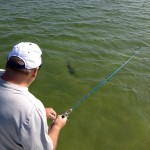 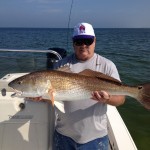 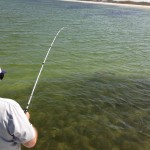 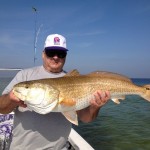 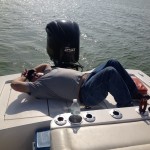