They’re not here in huge numbers yet but if you know where to look, large schools of Pensacola’s bull redfish can be found in some shallow water areas. Today’s trip was a combo instructional/fish catching session with some newly-placed local anglers that have heard so much about Redfish University from the thousands of locals that have attended classes at Redfish U. over the last several years. We started the morning with the regular topwater Sebile Bongas and Stickshadds and had a blast with some very nice quality speckled trout and some redfish in the 22-26″ range. As the sun rose, I thought maybe, just maybe, we could find some larger redfish for our anglers on some shallow flats that have been historically productive with the Pensacola bull redfish in the Fall. We approached our flats and immediately saw “floaters” sunning and looking for some Sebile Bongas. We strategically sat on two schools of 30-35″ redfish for nearly an hour and picked off several with topwaters, Gulp! 4″ Shrimp and even dropped a fly on one. Frankly, these fish are VERY easy to catch and anything in your tackle bag will work. It’s just a bonus service here at Redfish University. All fish released and another extremely pleased group of anglers at Redfish University. The same tomorrow. Thanks, E Holstman 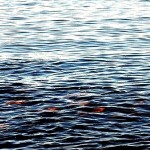 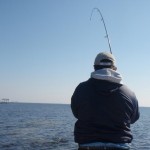