Guided Mr. Jason Dyess this morning. Jason wanted to find some redfish and speckled trout. Cruised to some East Bay banks and arrived at 515am. Again, starting very early is the key to topwater success. While we were waiting for enough light to see our topwater Bongas, Jason pulled Coke from his cooler and I noticed several yellow fruits(bananas) on the bottom of his cooler. I explained that many anglers consider bananas very bad luck and he had never heard of such a thing. He even Googled on his IPhone “bananas-bad-luck-fishing” to see for himself. I let him know that I didn’t believe in any of that silliness and that it was time to hammer some fish! First cast, there goes the banana theory. Trout after trout after trout. Nearly every cast, Jason stuck speckled trout between 14-20″. Played with that school of fish for a little while and then took off to find some better quality speckled trout and redfish.  Approached some docks on the south side of East Bay and really got some nice trout but only a few big redfish blowups. Pulled about a dozen solid trout and decided to concentrate our efforts over in Escambia. Fished the east and west side at around mid-bay and really found our stride. Lots of mullet and bait meant lots of redfish and trout. Went to Gulp! Jerkshads in camo to secure some great number of both species with some 3.5-5# trout in the mix. We cheated a little today as well. Some banks were infested with 4-6″ croakers, which are the speckled trout favorite snacks. Using the Gulp! Jerkys, we were accidently sticking lots of these croakers. Instead of reeling them in immediately, we would raise them to the surface and wait for a huge trout to grab them. This happened 3 times for us and hooked two nice trout over 4.5#’s. A true beast dropped another croaker near the boat. Jason also completed his inshore grand slam with a nice 2# flounder that I fumbled at the boat. Got the leader so we’ll consider it a catch! Lots of great action today with a great angler. All fish released healthy. Short trip in the morning then done for the week. E Holstman 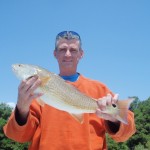 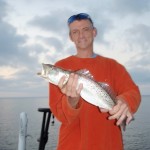 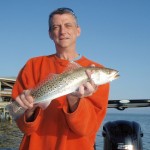 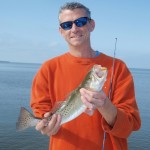 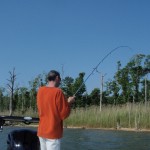 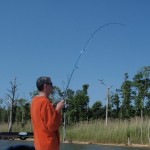 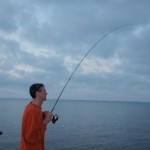 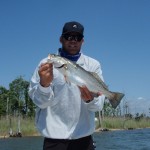 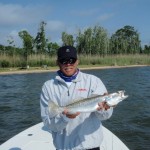