A redfish jamboree at Redfish University-Feb. 21, 2012

For the third trip with my Alaskan anglers, we departed Navy Point boatramp at 8am in search of some shallow bull redfish only to be met with stiff SE winds and some rollers over the bow of the Maverick 17 Master Angler. Returned to the ramp and asked the fellas what else they might be interested in. Both stated that they’d love to bring even more “redfish on the halfshell” back to Alaska for a family cookout. With the water moving in quickly, a SE wind and cloudy conditions, this sounded like an excellent plan. Travelled way east in the Excursion over to East Bay. I’ve been observing lots of mullet on wind-blown banks down there in the past few months and thought we’d be able to grant the request. Tied on some 1/4oz. Johnson Gold Spoons in gold and black and knocked out the redfish in a very short period. Continued down the bank and stuck redfish after redfish with some doubles in the mix. Most fish were great 23-27″ redfish but we did have a few overs in the 27.5-31″ range, but no complaints. We noticed quite a few flounder squirts as well in the very clear water but only picked up one. Some Gulps! would have picked up more flounder but they said redfish. It’s a great day when you don’t know how many redfish were caught. We didn’t bother with the speckled trout today since they were having so much fun with the redfish so we played catch-and-release for the rest of the time. I had a great time smashing them as well! They took four redfish and a flounder home and all other redfish were released after some photos. Total was probably 20-25 redfish between 18-31″ and a flounder. The guys will be back in Pensacola very, very soon and I’m thrilled with the huge numbers of repeat clients at Redfish University. I think I’ll ask tomorrow’s clients if they like “redfish on the halfshell.” Thanks, E Holstman 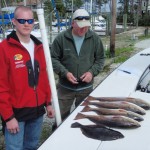 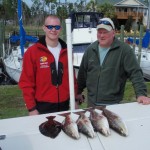 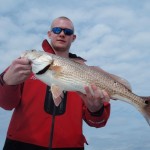 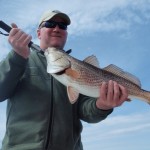 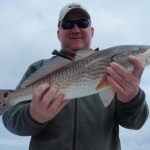 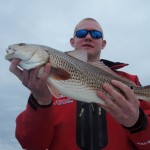 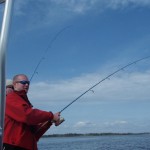 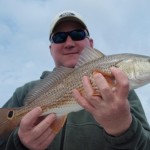 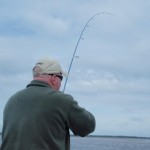 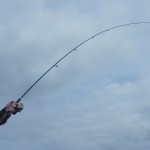 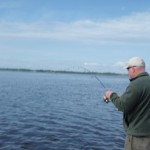 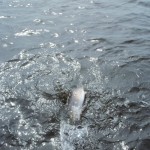 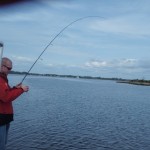 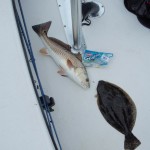 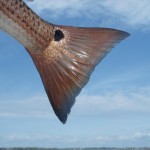 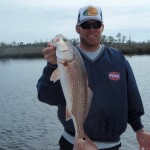