For the Day 3 finale, Leon Conley and I(Kelly was sick this morning and couldn’t make it.  Too bad because she has been catching all the fish) entered Santa Rosa Sound at 500am and ran to our first area on the north side in the dark. Drank some coffee and waited for enough light to see our very small topwater Sebile Bongas. As soon as that moment came, I positioned Leon for a long cast into some shallow water where lots of redfish normally gather. First cast and kaboom! A very nice 5.5# fish to the boat. Second cast, kaboom! Another at the same size. Trolled down the bank and got 5 more quality fish. The secret to the topwater baits, whether it be Sebiles, Rapalas, Mirrolures or whatever, is the size of the bait. The smaller the better. We like 2.5-3.5″ baits(we use the 3″ Bongas). An internal rattle and a brief pause every 3-5′ while dog-walking the bait seems to draw many more strikes. Many fish pounce while the bait is actually stationary. Give it a try. Anyway, made a run way east and got on a flat with some big trout. Found great fish in the 2-4.5#. Caught 10 or so and kept 7 good fish for dinner. By 8am, the topwater had really started slowing down so we grabbed the Johnson Gold Spoon rods and took off for the south side of the Sound. We use 1/4oz. Johnson Gold Spoons and a 3-4′ Stren Tinted Fluorocarbon leader in Gunsmoke in 15#. This leader is tied directly to the 10# Ultracast InvisiBraid without a swivel at the leader or at the spoon. Do not use a swivel, the line may twist a bit but you”ll double or even triple or even quadruple your catch. We basically hit every area on the south side from Opal Beach to Big Sabine that had grass on the bottom near the shore. If there were lots of mullet, there were lots of redfish. Picked off another 7-8 nice redfish over there. Lots of great redfish and trout today. Kept 2 redfish, as I promised Leon “Redfish on the Halfshell”, and 7 very nice speckled trout for the fish fry. I had a great time with Leon and Kelly. Both are very good anglers and I can’t wait to fish them again later this year. E Holstman 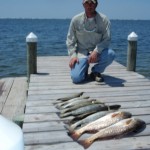 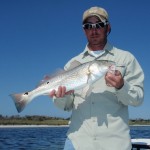 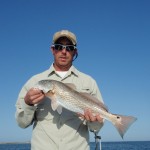 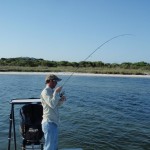 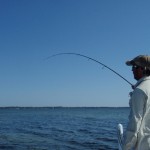 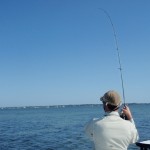 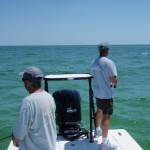 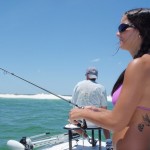 I will clarify the tripletail title later in this report. During today’s guide trip with Leon, I received a call from some folks staying on the Sound at Pensacola Beach. They asked me if I could take them out to catch lots of fish. I asked, “what species of fish might you be interested in?”  They replied, “the type that bend our rods.” Easy enough! I have to admit, before I took them to the Pass and the beach to catch whatever swims there, I tried to find some larger redfish and any trout. At 1230-400pm, it was pretty pointless so off to the beach fish we went. Set them up with spoons and jerkshads on light tackle and slayed the Spanish mackerel, ladyfish, bluefish and hardtails!! On the way back, I decided to cruise the Pass and check around the bouys for the tripletail that I see every year around this time and tidal condition. There weren’t any around the bouys but there was an unusual amount of wood, stumps and degris in the Pass today. Under nearly every piece of floating structure was a 3-8# tripletail. I’ve seen them in good numbers before in the bay and Pass at times, but these numbers were GREAT! Of course, and as most know, I do not allow livebait on my boat and haven’t used livebait in decades. I rigged some Gulp! 2″ Shrimp and 1″ Crabs on straight hooks to try to draw some bites as I consistently catch triple with Gulp! Jerky, Shrimp and Crabs in the bay and even a few times in the Pass. Even tried the old drape over the log trick but these fish just simply would not eat anything I had. I even pulled a few bonefish and permit flies in front of there noses but nothing. I may break down and get some live shrimp to get my revenge on those terds this weekend. Anyway, it was nice to see some triples and great watching the group “bend their rods.” E Holstman 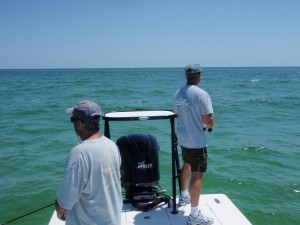 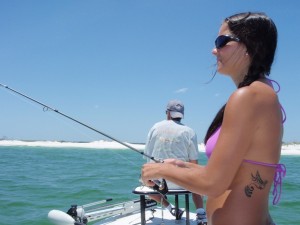